John was born in Malaysia in 1964, with family roots in Ross-shire.  He graduated from Edinburgh University in 1987 with a degree in civil engineering and has designed and built many and varied facilities, including dams, roads, bridges and towers and been responsible for multimillion-pound projects both in the UK and overseas (Botswana and Abu Dhabi).

John has been a member of the Kilbraur Wind Energy Co-operative board since his election in June 2009.  Based in Sutherland, John has been an active member of the board, serving as secretary for almost 4  years, taking a keen interest in the wind farm production figures.

John has a keen interest in promoting local small-scale renewable energy projects.  He is actively working on domestic energy conservation and micro-generation and on the development of sustainable community projects in Brora and Helmsdale.

Graham is married to Scilla, lives in Sutherland and has been a KWEC Director since 2010.

He is a Director of local consultancy Phillips Aitchison, with experience ranging from international big business to locally based community projects.  Graham previously worked at Ernst & Whinney, PWC and PA Consulting Group. He is also a Trustee of the Port of Inverness, and the Cromarty Arts Trust.

On the corporate side Graham has spent over 30 years consulting at Main Board level on a wide variety of topics.  This means he can offer a broad professional background to the Kilbraur Co-op.  Work has included corporate strategy, mergers and acquisitions, turning round a multinational manufacturing group, auditing an international bank, commercial tendering, and setting up systems for governance, risk management and compliance.

Community projects include feasibility studies for a new Community Centre, for a Community Sports Hub, and for a Visitor Centre in the NW Sutherland Geopark; training for voluntary organisations, chairing a Chamber of Commerce initiative to set up a CCTV scheme in an area suffering from street crime, and setting up the first community run housing for local needs scheme in the UK.

He was formerly Highland Councillor for East Sutherland & Edderton where he chaired the TEC Services Committee and the Fishery Harbours Board, and was a member of HITRANS.

Educated in Perthshire, with a love of the Highlands making frequent visits and a member of Bonar Bridge and Ardgay Golf Club.  Malcolm has held Board appointments in the Chemical and Oil Industries and now having retired from UK business lectures on Climate Change and the End of Oil in the UK and India where he sponsors Renewable Energy projects at the local University.   The Moss family have an Indian Company that owns a 600KW Wind Turbine from which we get daily performance figures.   Wind is less than at Kilbraur with a PLF of 18% but without any government subsidies is just profitable and mitigates the families’ carbon usage.  Our past and current companies contribute a minimum of 5% of profits to Renewable Energy projects which have involved development of solar powered boats and cars as described on our website www.mosssolar.com We are currently researching solar paddle wheel boats capable of operating in weed infested waters continuing the success of the New Era based on the Beauly Firth.

I am 63 years old and have lived in Wick for the past 35 years, all of this time was spent in a variety of posts with NHS Highland, latterly, before I took early retirement in 2015 I was Head of Capital and Property Planning with responsibility for a multi-million pound budget for major capital projects throughout the NHS Highland area. At one time I was Unit Administrator for Caithness & Sutherland and chaired the management committee, I was responsible for Catering, Domestic, Portering and Estates services. Most of my working life has been spent in the NHS apart from a couple of years with Dr Barnardos after I graduated from Edinburgh University with a degree in geology! I have recently taken on the role of Secretary with the Royal Burgh of Wick Community Council.

In my spare time I am interested in Scottish music, particularly pipe band music and have recently stood down as secretary of Wick RBLS Pipe Band after 18 years in post. I have also organised various traditional music concerts in Wick. Previously I have served on Staxigoe Hall Committee and been a member of the Hillhead School Board. I am interested in the environment including renewable energy, improving access to the countryside and clearing litter! I am also interested in walking and going on holiday. 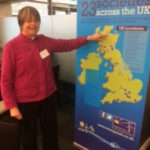 I moved to Inverness from South London in 1992 with my Husband who found employment then self Employment as a Dentist. I have had a varied Career including Cancer Research leading to a Phd in 1983 then a full time mother from 1986 to 2000 when I retrained in Admin and Information management at the Inverness College. Since then my Employment opportunities have included a role within the Oil Industry and a Customer advice centre role where I gained the City and Guilds certificates in “Energy in the Home” and “Renewable Energy in the home”. In recent years I have been a self Employed Tax agent. I have been a shareholder in the co-operative since the first release of shares.

I am a semi retired farmer,having farmed at Er.Ferryton Farm,Balblair, in the Parish of Resolis on the north side of the Black Isle for nigh on sixty years. My family being associated with the farm and Parish since the seventeenth  century.

In my younger days I was actively involved in Young Farmers,local committees of hall,community council and am a life member of The Black Isle Farmers Society. Also, in association with my farming business I am a member of Highland Grain Ltd. a farmers Co-op. based at Tore and served on the board for nine years.

Always an enthusiastic supporter of renewables ,I guess farming could be classed as the original, I have taken great interest in Kilbraur since coming across the initial offer at The East Sutherland Show, Dornoch some time ago now. I have always attempted to attend the AGMs,which are informative and relaxed.

News of other Energy4All Co-ops

ENERGY4ALL
CO-OPS
Kilbraur is a member of the Energy4All family. Below are links to some of the other Co-ops in the Energy4all family:

Manage Cookie Consent
To provide the best experiences, we use technologies like cookies to store and/or access device information. Consenting to these technologies will allow us to process data such as browsing behavior or unique IDs on this site. Not consenting or withdrawing consent, may adversely affect certain features and functions.
Manage options Manage services Manage vendors Read more about these purposes
View preferences
{title} {title} {title}